Endeavour Energy has updated the markings and warning lights on its fleet of response vehicles. They now display Hi-Vis fluorescent markings and a fully synchronised pattern of amber warning lights that simultaneously flash through 360 degrees and are visible from any viewing angle around the vehicle.

Ambulance Visibility was engaged by Endeavour Energy to make scientifically based recommendations on visual warning methods and draft a new marking/warning light specification for their response vehicles. Redline Fleet completed the lighting fit-out and a link to their YouTube video appears below.

The approach to the redesign by Endeavour Energy was unique. The Energy provider trialled three different arrangements of markings and warning lights so that staff could assess how effective each style was under real world conditions, including operations on suburban, rural and expressway roads, both day/night and under different weather conditions. The lead design [of the three designs] incorporating fluorescent/reflective markings with simultaneously flashing amber lights was voted by staff as the most visible and effective layout under all conditions.

The positions usually allocated for markings and warning lights on the response vehicles were unavailable due to the location of the existing equipment boxes and racks. By necessity, this encouraged innovative solutions to ensure that 360 degree visibility and viewer interpretation of the vehicle’s purpose, size and orientation were not compromised, especially at road incidents and other high-risk situations.

After the trials were completed, the staff readily agreed with the scientific findings that large panels of fluorescent/reflective colour combined with a synchronised lighting solution provided significantly greater levels of visual conspicuity and recognition by the public. The synchronised light-heads flashing simultaneously in a double-flash pattern around the vehicle were found to be superior to random flashing or alternating light patterns under all types of road and weather conditions. This finding is in direct contrast to the popularity of the current trend supporting alternating lighting displays on emergency vehicles (particularly for bi-colour warning lights).

The synchronised lighting pattern provides unity and allows Endeavour Energy vehicles to be readily seen and identified when parked alone in traffic or easily differentiated from other vehicles parked alongside or nearby at an incident. The simultaneous flash pattern with its distinct off period also increases the opportunity for passing drivers to discern and avoid people walking around the Endeavour Energy vehicles in the dark at night.

Posted on May 21, 2016 by John Killeen (Ambulance Visibility)

WA Police (WAPOL) recently announced the completion of a project to upgrade the markings, warning lights and sirens of not just the Highway Patrol cars, but all vehicles in the fleet. The project team reviewed current best worldwide practice and translated the findings onto their vehicles.

While a few police forces in Australia have begun to affix fluorescent colours to their vehicles, WAPOL is the first to fully integrate a multicolour Hi-Vis marking scheme with state-of-the-art LED warning lights and sirens with an expanded frequency range.

Posted on May 17, 2016 by John Killeen (Ambulance Visibility)

Many earlier posts have described the problems associated with affixing a range of different patterned markings (especially rear chevrons) onto emergency vehicles.                 The problem is made even worse when a number of local agencies independently decide to display different pattern styles to brand their vehicles in an attempt to highlight their agency’s individuality. It is only when all the different vehicles pull-up alongside one another that the full impact of the pattern confusion becomes obvious.

The image above image clearly demonstrates the conflict effects with a mixture of diagonal chevrons in red/white or yellow/red colours alongside the bands of blue and red chequers. The patterns are so strong that they continuously distract the observer by pulling and drawing the eye to different areas within the scene. This effect makes the outline and shape of each vehicle much harder to discern. Subsequently the observer’s ability to make sense of the scene is greatly reduced. The landscape background shown is plain but another more complex streetscape littered with cars, signs and buildings would visually complicate the entire scene even further.

The only stand-out elements are the plain yellow-green fluorescent arch on the rear of the fire appliance and the orange sill stripe on the ambulance, both of which reinforce the important visual strength of solid fluorescent coloured markings on vehicles. The image also demonstrates the weakness of red/white chevrons when compared to the universally accepted colour combination of red and yellow chevrons angled at forty five degrees.

Enough said for today……..try to stick to simple solid colour designs for vehicle markings and other drivers approaching an accident scene will appreciate your effort.

It has taken many years but fluorescent markings are finally beginning to appear on more and more police, fire and ambulance vehicles around the country. While the response vehicles of some emergency services still wear the traditional Sillitoe scheme or a stylised variation of the checkered pattern, their vehicles are slowly being enhanced by the addition of fluorescent stripes and panels – usually in yellow-green or red/orange colour schemes. 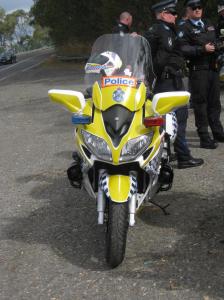 Colour, pattern or lighting creep refers to the gradual conversion over time of new marking or lighting styles onto emergency vehicles.  Creep is seen when agencies that have previously rejected changes to their markings begin to display small modifications to the colours/patterns/warning lights on vehicles or alternatively they fully adopt new designs that are similar to other national or international agencies. The changes are usually slow but often driven by changing attitudes within an agency or an acceleration of the popularity of a design. Occasionally a rapid industry-wide cascade (rather than a creep) can be brought about by revised regulations e.g. chevron markings in the US after NFPA 1901 and NFPA 1917 were published or the recent change to yellow body colour + Battenburg markings on St John’s ambulances in New Zealand.

END_OF_DOCUMENT_TOKEN_TO_BE_REPLACED

Michael Crawley from Perth County, Ontario has sent me some photos of their new Sprinter ambulances with high-visibility fluorescent/reflective markings.

“We now have 3 Mercedes sprinters in our fleet and have had numerous positive comments about the graphics. Just wanted to thank you again for all your help……”

Thanks for the great photos Michael. You can follow the Perth County EMS Twitter feed at https://twitter.com/perthcoems 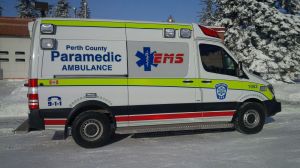 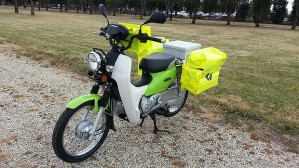 Get out of the way: An article on the history of ambulance warning lights

This article was published on Gizmodo Australia in early June and provides a brief history of warning lights before discussing the important research undertaken by Michael Flannagan and his associates at the University of Michigan’s Transportation Research Institute. I have discussed Michael’s comprehensive work on emergency vehicle warning lights before in this blog and as part of my PowerPoint presentations. This article is a gentle introduction to the raw research which is a highly recommended read and available from the AV website or by direct download using the links below