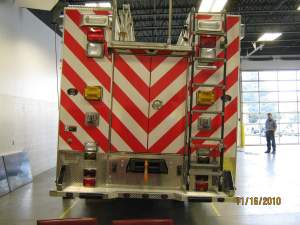 In late November 2010, I received a blog comment from Capt. John Berryman from Pikesville Fire Department asking the following question about using upright chevrons on the rear of fire appliances rather than the inverted-V pattern. John also forwarded a photo of a Pikesville fire truck.

Thanks John – Here is a copy of my reply:

I have undertaken a considerable amount of research in an attempt to find a methodology as to why chevrons are oriented the way they are?  It is clear that chevrons originating in ancient heraldry can be oriented either way; as are chevrons used in military insignia. Most road signs use an inverted chevron or horizontal chevron shape as an indicator arrow pointing towards the required direction of travel. The only definitive document I have found with any explanation about this is the Guide to Hazard Markers  and published by Queensland Main Roads (Australia). This document outlines the rationale for particular chevron directions but it does not include an upright chevron pattern within the definitions.

Adoption of chevrons for the UK Police Battenburg conspicuity design.           As a consequence of a need for enhanced high-conspicuity vehicles on the motorway and high-visibility policing off the motorway, the following operational requirement was formulated and developed by the UK Home Office; “To determine for police traffic patrol vehicles operating in a motorway environment a suitable common standard of markings which enhances, at a distance, conspicuity and recognition as a police vehicle.” Cutting a long story short – the Battenburg conspicuity pattern was developed for police sedans in the mid to late nineties. It made use of the new fluorescent retro-reflective materials that had just become available at the time. The Battenburg design came in two types:

The operational testing of Battenburg concentrated on the identification of the chequered blue/yellow side profile rather than the anti-collision chevron red/orange profile marked on the rear. In fact no independent testing of the chevron layout after separating it away from the Battenburg chequered vehicle design was ever undertaken. The development team simply borrowed the red/white inverted-V chevron pattern from the earlier police vehicles and combined it with the Battenburg trunk-mounted chevrons which were then altered to the new fluorescent colours. It was taken for granted that the new chevrons would reduce the rear-end collisions with police cars; collisions that had in fact been increasing during the previous years. The inverted-V orientation of the chevron was now formalised for the first time into the UK Police Battenburg design specification.

On a theoretical level, the accident data clearly demonstrate that high levels of conspicuity (in sensory terms) do not guarantee detection of a vehicle, a conclusion supported by the results of our two experiments. They also suggest that cognitive factors, such as drivers’ expectations, may play an important role in causing this kind of `looked but failed to see’ accident. Precisely which cognitive factors are involved include fatigue, false hypotheses, inattention or a combination of all of these remains to be determined by future studies? On a practical level, the results suggest that drivers of all vehicles that are stationary on a high-speed road should try to draw attention to the fact that their vehicle is motionless: parking at an angle is one way to achieve this.

This research demonstrated that the use of rear chevrons does not guarantee a reduction in rear-end collisions. During the testing simulations one test driver had actually collided with the rear of the simulated police vehicle fitted with red/yellow chevrons.

The Battenburg markings were then borrowed by other UK emergency services. The Ambulance Services in the UK translated the yellow/blue Battenburg pattern into a new green/yellow combination and added a full sized chevron panel to the rear of their ambulances. This is the point in time that the UK layout would later go on to popularise the chevron pattern on ambulances and fire trucks in overseas countries. Remember, no research had yet concluded that the chevron design reduced rear end accidents!

The Battenburg testing had taken place on sedans and not full sized truck modules. Initially the UK NHS ambulance services experimented with a four axis chevron (four distinct chevrons pointing to the centre) but this was soon changed to the inverted-V. The inverted-V chevron has now become the standard orientation by default and is based on the UK Battenburg designs. This design logic relates back to the direction of the descending arms on chevron road signs indicating that the required direction of travel is to the side and away from the sign. This format is based on a top-down scanning pattern used by most people when looking at a sign, whereas the upright-V pattern would require a bottom-up scanning pathway . Other UK emergency services picked up the Battenburg + chevron pattern and began using the markings across many different exotic combinations of low-vis colours. The only true Hi-Vis colour scheme for Battenburg is the police yellow and blue and for chevrons red/orange with yellow.

This has led to “chevron creep” onto ambulances and other emergency vehicles in the US, including the borrowing of the standard UK yellow/blue police colours to represent other emergency agencies (especially EMS). The draft NFPA specification 1917 for ambulances now threatens to secure and formalise the Inverted-V chevron as the recommended baseline marking for all ambulances in the United States.

By default, the Inverted-V orientation will remain the international standard. As I explained earlier the only logic available for the Inverted-V appear to be the top-down scanning pattern and  the independent definitions provided by the Queensland Roads document. There is now an official and public expectation secured by several formal US and UK specifications that chevrons will be fitted:

I hope this summary provides some information about what has happened to the chevron pattern over the last few years. Unfortunately it appears that little support will be available for the upright-V chevron pattern as public opinion has quickly adopted the Inverted-V as the national standard. Not only will your agency vehicles be different to most others around the country but you will continue to receive criticism for not following the national guidelines, which although not mandatory, still carry substantial weight in both the industry and public arenas.

As stated throughout this summary, there appears to be very little concrete evidence confirming the design rationale or efficacy of chevrons in any orientation, but the pattern appears to have secured a formal position due to a perceived element of safety and through popular industry opinion. There is very little research available to assist you in making a decision concerning the alternate chevron design currently on your vehicles.  Also, have a look at the 3rd Annual Colorado Safety Summit presentation available in the downloads section on the AV website at http://www.ambulancevisibility.com …. the PowerPoint illustrates many of the details I have discussed.