Almost every passing week sees another police, fire or EMS agency boasting  at a vehicle launch that their response vehicles are now displaying a new world’s best practise Battenburg high-visibility markings. The agency chief always adds that the latest change to the HiVis markings has only taken place after a lengthy consultation period with staff that has also included comprehensive safety research.

Nine times out of ten, the new markings unveiled on the vehicle are not Battenburg and are in actual fact examples of Sillitoe markings. The Sillitoe chequers can often make the vehicle harder to visualise and the Sillitoe style of small-blocked markings are already being removed from emergency vehicles in a some countries around the world. There remains great technical confusion about the difference between Full Battenburg, Half Battenburg and the Sillitoe chequered marking.

Modified marking designs that fall between the true Sillitoe and Battenburg markings are ‘hybrid’ designs. The hybrids are usually designed by signshops or advertising agencies in an attempt to generate unique and eye catching marking schemes that prove their creative prowess. The hybrid designs are inevitably a patchwork of ideas sourced from other emergency vehicle colours and marking layouts from around the world. They are usually promoted as high-visibility, Battenburg or safety markings. Rarely do you hear of a new chequered vehicle design claiming its roots to be in the Sillitoe pattern. So what’s the difference between them? Here is a brief look at correctly identifying Sillitoe, Battenburg and hybrid markings.

The Sillitoe chequered pattern has its origins in Scotland as the Sillitoe tartan which was adopted in black and white to identify the Scottish police. The pattern has been modified for use in a range of colours including blue for police, red for the fire brigade, red or green for ambulance and orange for the volunteer State Emergency Services in Australia. Police forces and other emergency agencies around the world have used the Sillitoe check for many years. The design is based on three lines of multiple small square blocks in alternating colours. The most common base colour is white which makes silkscreening or die cutting of the coloured squares very easy for signwriters. The squares are all equal in size and can be reproduced in a range of sizes.

A Victoria Police Highway Patrol Car marked with a Sillitoe hybrid pattern that tends to camouflage the vehicle shape, especially at night. Note the lack of full body contour markings and the text lettering is almost unreadable. The large logo complicates the design even further.

Sillitoe is a recognition pattern, not a high-visibility marking scheme. Seen in red, blue, green etc it is usually recognised as indicative of an emergency response vehicle; but which agency depends on the particular colour.  Sillitoe is not easily visualised over longer distances as the squares tend to merge and become less obvious. Agencies located around the world are now removing the Sillitoe scheme and replacing it with solid panels or wide striping in fluorescent colours.

The Full Battenburg scheme was designed by the UK Home Office in the early 1990’s and is another recognition pattern. This new scheme was explicitly designed for British police vehicles, therefore limited testing was only ever carried out using the blue and fluorescent yellow colours. All the later Battenburg colour combinations, including the NHS green and yellow were never individually tested prior to their adoption by other UK public service agencies. Battenburg was initially designed as a national corporate police marking scheme and it had to be:

The ideal Battenburg layout for Police sedans and wagons. Note the 1.5 rows of side pattern with just a few few blocks of colour. there is also thin yellow contour striping over the roof arch and on the pillars

Another major concern was that the new design should assist in [community] high visibility policing to reassure the public and enhance the potential deterrent benefits of proactive traffic patrol activity. Battenburg had to be acceptable to at least 75% of the staff using it. It was indeed fortunate that the Battenburg blue Police colour was identical to the blue Sillitoe colour already in use across the UK.

The large square or slightly rectangular flourescent yellow blocks make up the visibility element of Battenburg.  Every second block was made blue because it is the last colour to be visualised before human vision changes from colour to monochromatic shades of gray as darkness falls. The large block pattern was chosen because “The conspicuity of an object depends on its contrast with its background. Visual attributes of primary importance are colour, luminance and form.”

A hospital based transfer ambulance with overwhelming Battenburg hybrid markings - the approved Battenburg scheme is a maximum two rows of alternating blocks. Battenburg was never designed to be used like this. An advertising agency has unintentionally pushed the modified Battenburg hybrid scheme over the line to create a camouflaging design with unreadable signwriting.

The Battenburg specification states that ‘colours as close to square as possible tend to be the most conspicuous’. It has also been observed that “… fluorescent paints possess greater visual fields than their ordinary counterparts.” The same researcher also noted that blocks tended to be more conspicuous the larger and the squarer in shape they were and that surrounding the blocks with contrasting colour was a major factor in increasing the effectiveness of the stimulus in being conspicuous.” Note that this statement does not apply to the smaller chequered squares within the Sillitoe pattern. I will not go into the pros and cons of the Battenburg marking scheme vs Sillitoe  in this post, however the Full Battenburg scheme was designed primarily for use on high-speed motorways and to be viewed against plain backgrounds.  It was discovered during development that the Half Battenburg scheme was superior within urban landcapes. 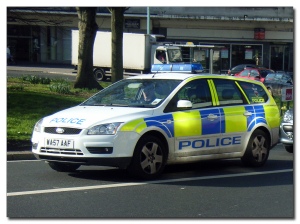 The Half Battenberg uses only the top row of the Full Battenburg scheme.  The simple pattern of just a few large alternating blocks of colour enhance the physical conspicuity of the scheme when viewed amid the complex urban clutter. The Full Battenburg design is prone to delivering camouflage effects when surrounded by busy street scenes that tend to break up the solid blocks in the design. The Half Battenburg is more effective in city environments where vehicle speeds are slower. The emphasis is placed on rapid recognition at distances under 200 metres rather than maximum visibility. The Half Battenburg scheme also allows more text and signage to be placed on vehicle than the full scheme. It is also much simpler for signwriters to affix the half pattern to vehicles as the few coloured panels don’t have to be intricately die-cut to fit the european body curves often found on modern cars.

Hybrid designs are created by sign shops and advertising agencies. They cherry pick designs from all over the world and combine them into a creative swatch which is then affixed to the emergency vehicle. Very few agencies dig deeply into visibility and conspicuity research to maximise safety aspects in their choice of design. They often add a single narrow stripe of fluorescent colour to prove the high-visibility claims they make for their designs. Sillitoe and hybrid marking schemes do not fall into the Battenburg or fluorescent colour high visibility/conspicuity categories. Hybrid designs are usually a rainbow cake mixture located somewhere between Sillitoe, Battenburg and fluorescent formats.

Most importantly, these hybrid markings do not usually enhance visual conspicuity which directly affects the safety of the crew, the patient and the vehicle.

2 Responses to The difference between Battenburg high-visibility markings and Sillitoe chequers on Police, Fire & Ambulance vehicles